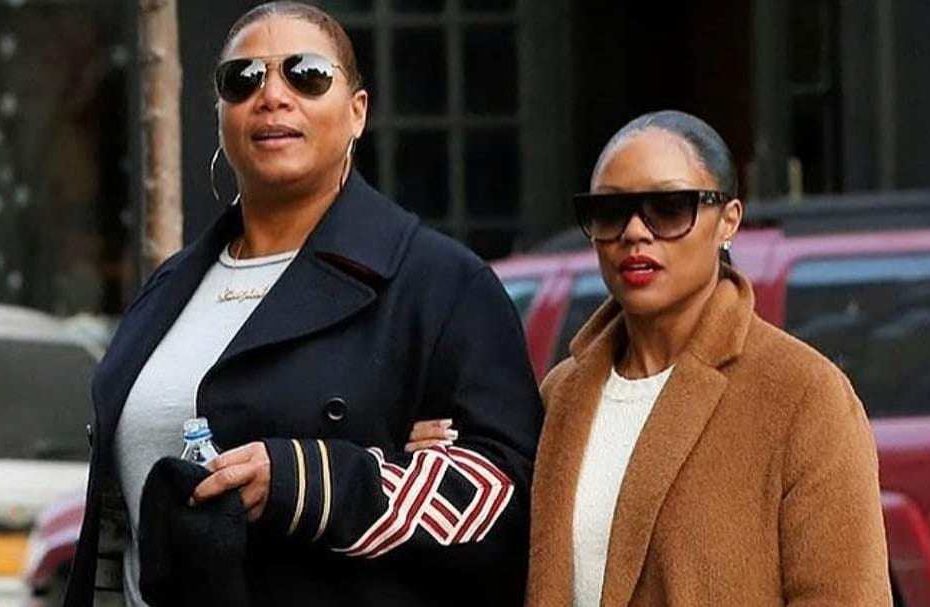 Queen Latifah has had an outstanding career in music and film. The literal Queen of rap has been an influence for women of color around the world and continues to inspire the next generation of female rappers and artists. Scroll down to know more about Queen Latifah’s wife or husband and weight loss journey.

Queen Latifah has different sources of revenue that contribute to this staggering net worth.

The Queen earns primarily from producing music and acting in films. Her studio albums include her debut album All Hail the Queen in 1989 and her latest album, Persona, in 2009. She has sold well over two million record sales. Latifah was also given the prestigious Grammy Award as Best Rap Solo Performance for her work on U.N.I.T.Y.

Queen Latifah succeeded in both the music and film industry as she received an Emmy, a Golden Globe, and two NAACP Image Awards. She was also the first hip-hop artist to have a star on the Hollywood Walk of Fame back in 2006. Latifah also acted in multiple films such as Taxi, Hairspray, and 22 Jump Street.

This amazing rapper worked hard to be where she is now and has succeeded in her field. Thus, her net worth represents her cumulative efforts over the years accurately. Queen Latifah’s net worth is $70 million.

Moreover, she not only earns from producing music and acting in films, but she also has many business ventures. First, she has endorsements and product lines of her own.

She has famously worked with Jenny Craig, Pizza Hut, and CoverGirl. Her line, CoverGirl Queen Collection, was made specifically for women of color; she also has a perfume line called the Queen and Queen of Hearts.

In 1999, she released her daytime talk show aptly titled The Queen Latifah Show. Jada and Will Smith worked as executive producers. Finally, Queen Latifah has an autobiography called Ladies First: Revelations of a Strong Woman.

All of these income sources contribute to Queen Latifah’s $70 million net worth.

Is Queen Latifah Married to Wife/husband?

Queen Latifah guards her private life dutifully. Many have speculated on her sexuality, mainly because of the various rumors surrounding her.

However, we know that in 1995, Queen Latifah had a boyfriend, Sean Moon. The two were victims of a carjacking. The carjackers fired and nearly hit Sean. Since then, Latifah refused to talk about her private life and emphasized it in a New York Times interview.

“I don’t feel like I need to share my personal life,” Queen Latifah said, “and i don’t care if people think I’m gay or not. Assume whatever you want. You do it anyway.” 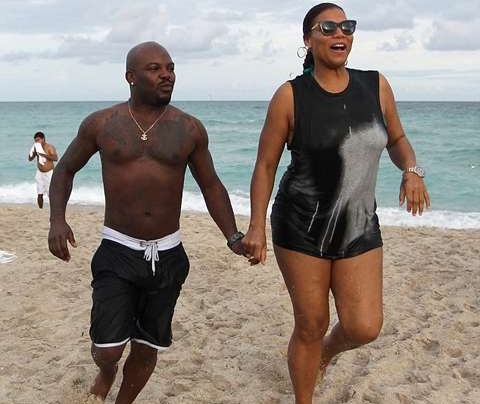 However, being in the public spotlight, the media has captured Latifah with many potential relationships. Keep in mind, though, that she has not confirmed any of these rumors aside from one.

Queen Latifah was rumored to be dating Monifah in 1997, Debbie Allen, and Kendu Isaacs though there is not much information on them.

Media also claimed that she was in a relationship with her personal trainer, Jeanette Jenkins, from 2002 to 2011.

But in 2009, there were rumors that Queen Latifah was dating Eboni Nichols, a choreographer and former cheerleader for the basketball team Los Angeles Lakers.

In 2017, sources claimed that they were engaged, and a year later, Nichols was seen with an apparent baby bump. The two welcomed their son, Rebel, in 2019.

In 2021, Queen Latifah publicly mentioned her wife-t0-be partner Nichols and son, Rebel, in the BET Awards. 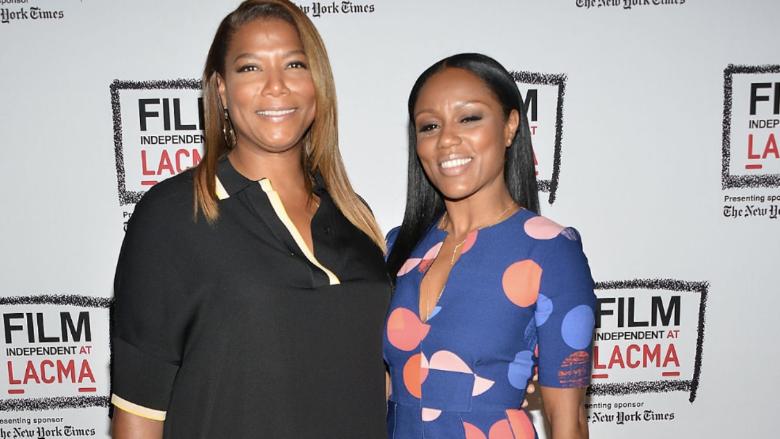 How Tall is Queen Latifah?

Queen Latifah is quite a tall person. She measures 5’10” and is among the taller female rappers.

Compared to fellow popular icons, there is quite a big difference. Cardi B and Nicki Minaj are 5’3” and 5’2”, respectively. Thus, there is almost a 7-inch difference between them.

Megan Thee Stallion is a comparable artist to Queen Latifah; she has the same height. The “Stallion” in her name actually refers to her tall height in part.

Queen Latifah began her weight loss journey after collaborating with Jenny Craig as a spokesperson. She lost over twenty pounds in 2008.

To achieve this remarkable weight loss, she worked with Jeanette Jenkins– a celebrity trainer. She did a lot of different exercises, ranging from jogging on the treadmill to the elliptical machine, mostly cardio work.

Combined with a healthy diet supplement of vegetables and fruits, Queen Latifah lost a lot of weight. There is a website on her entire weight loss process. She stressed, however, that the transformation was not “for the looks.” Instead, she did it in the interest of her own health and nutrition and would otherwise be comfortable in her body.

Queen Latifah was displeased when she was told to lose weight for the TV series Living Single. But, if a character requires a slimmer or bigger figure, she will work towards it.

She is an active advocate for destigmatizing obesity and encouraging body positivity. 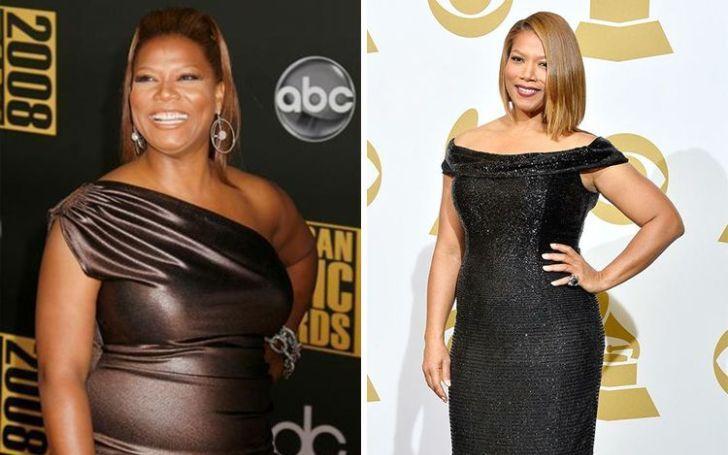 Queen Latifah has one son named Rebel. Though she prefers to keep her private life and relationships out of the public eye, she finally acknowledged Rebel and her partner, Eboni Nichols, in an award show in 2021.

The public first heard of Nichols’ pregnancy in early 2018 when she was seen with a baby bump. 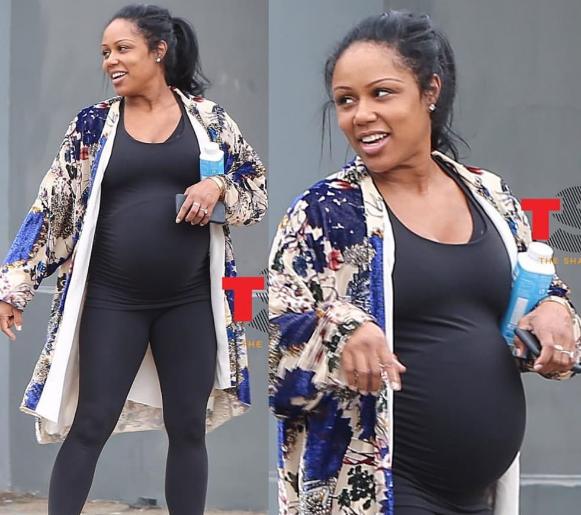 Queen Latifah was seen with a baby bump

The U.N.I.T.Y. singer came into the world on the 18th of March, 1970. She is currently 51 years old. The rapper’s birth name is Dana Elaine Owens. However, she is known by most as Queen Latifah.

Queen Latifah is one of the leading icons not only in female rap but also as a woman of color working in the music and film industry.

Many look up to her and her historic career and hope to follow in her footsteps. Make sure to keep an eye out for Queen Latifah’s next projects to see what she’s all about.